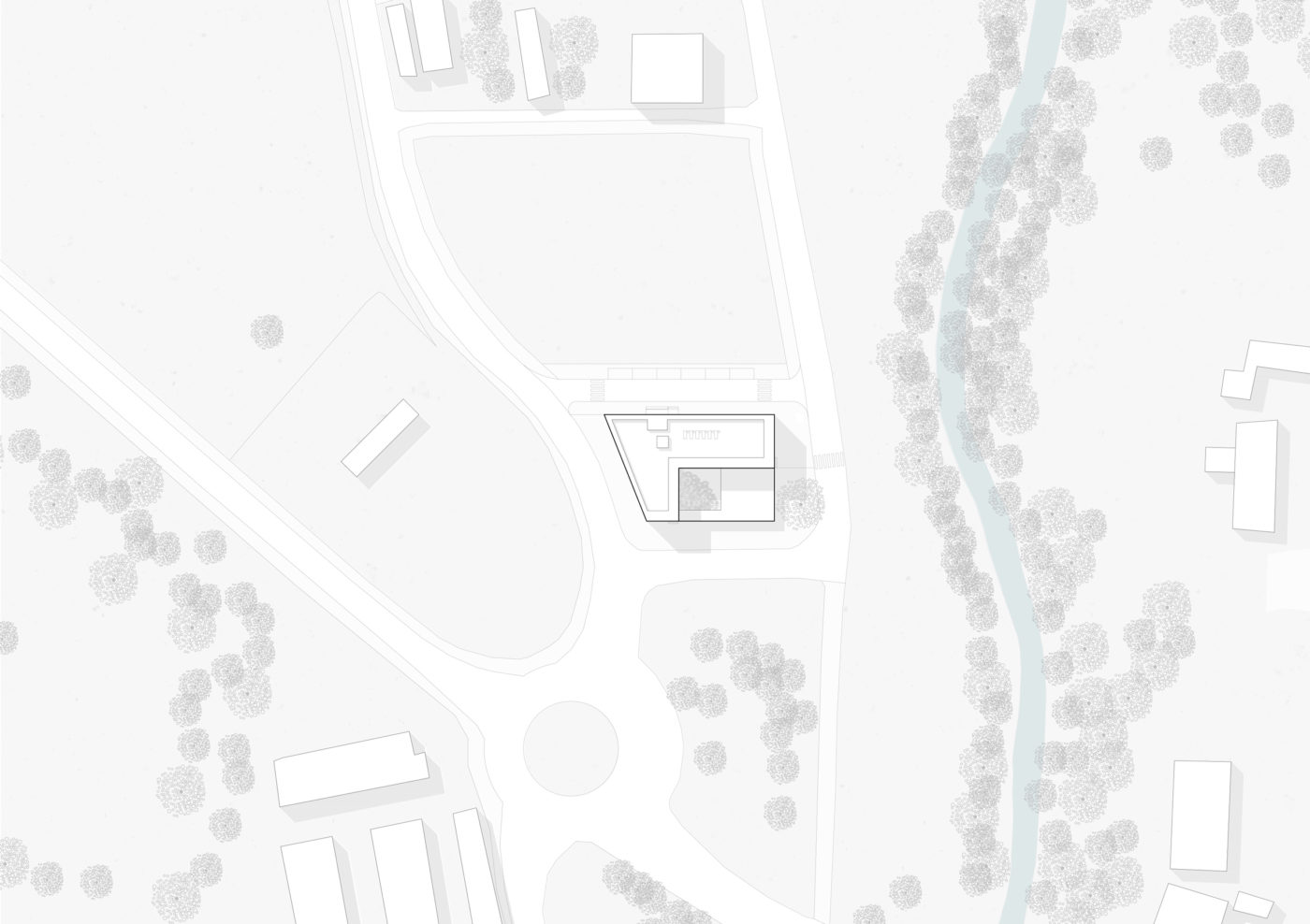 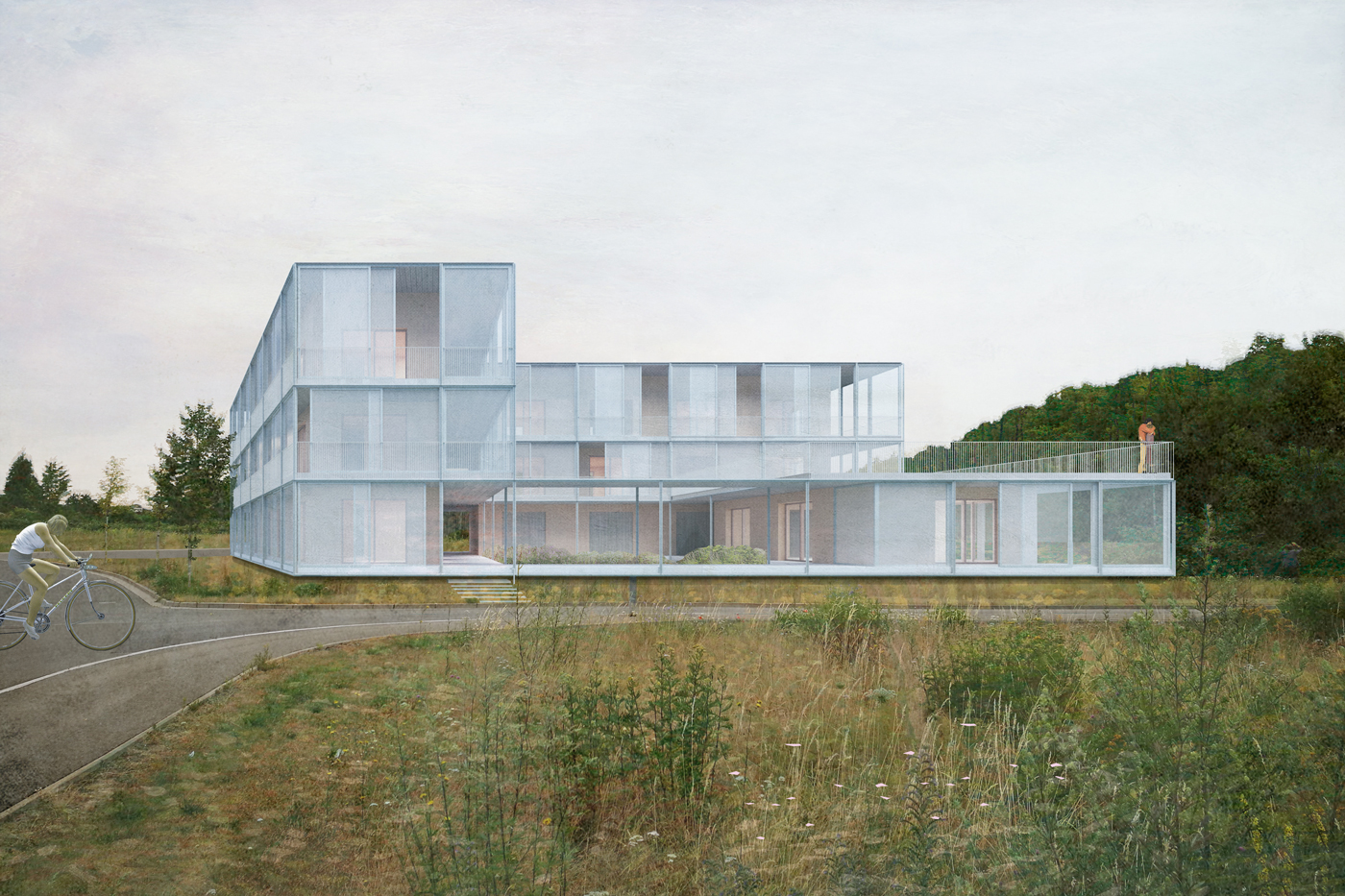 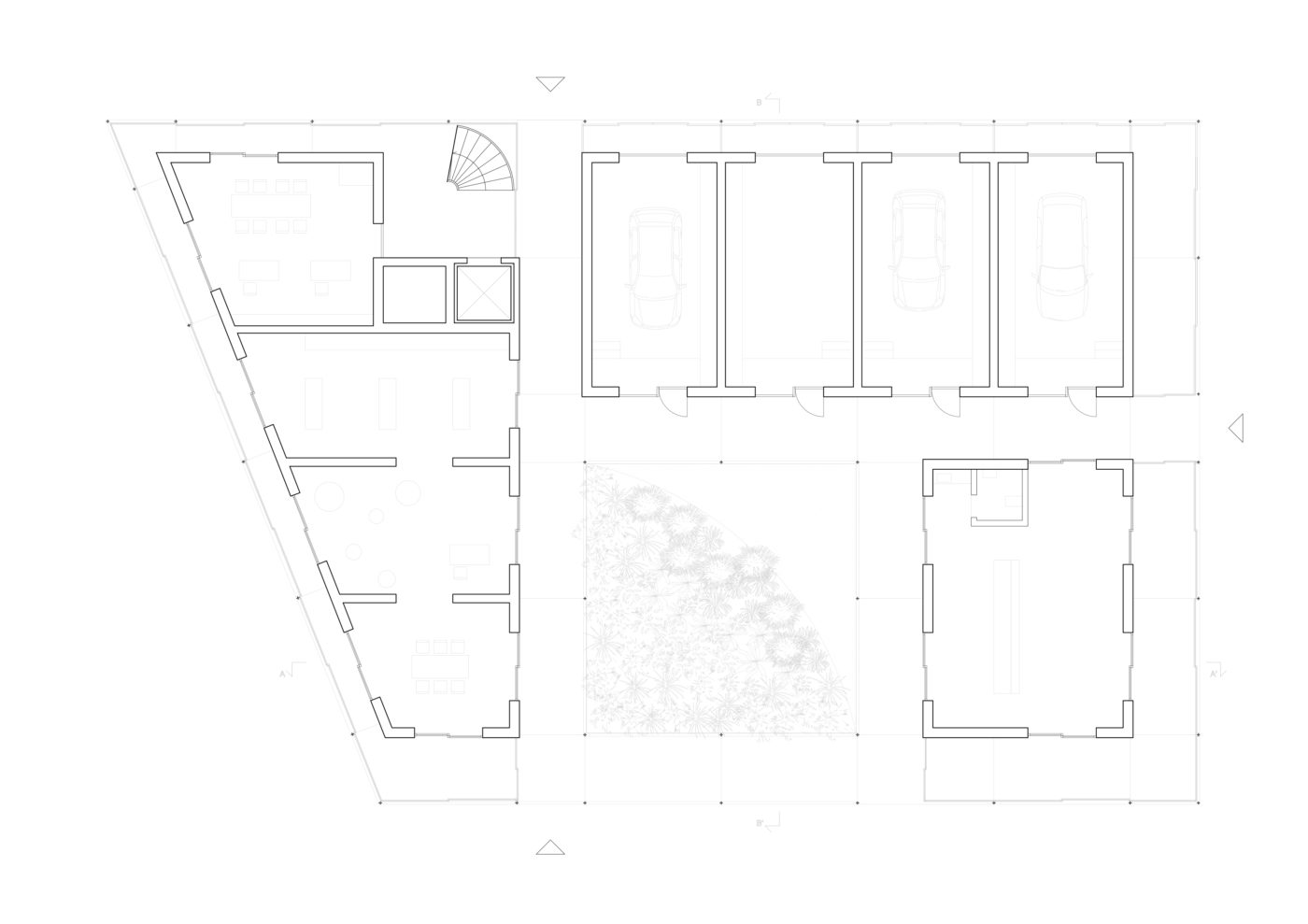 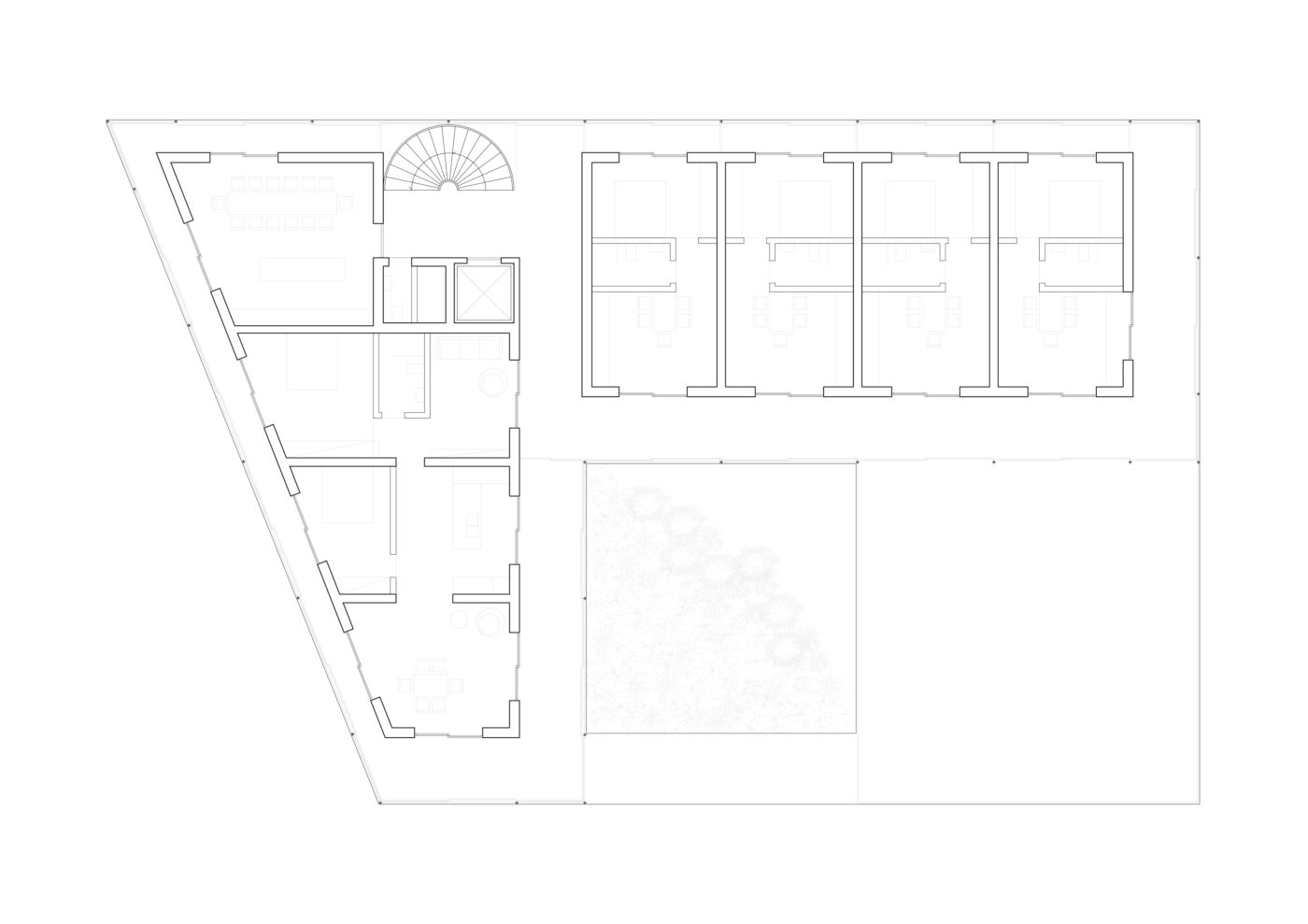 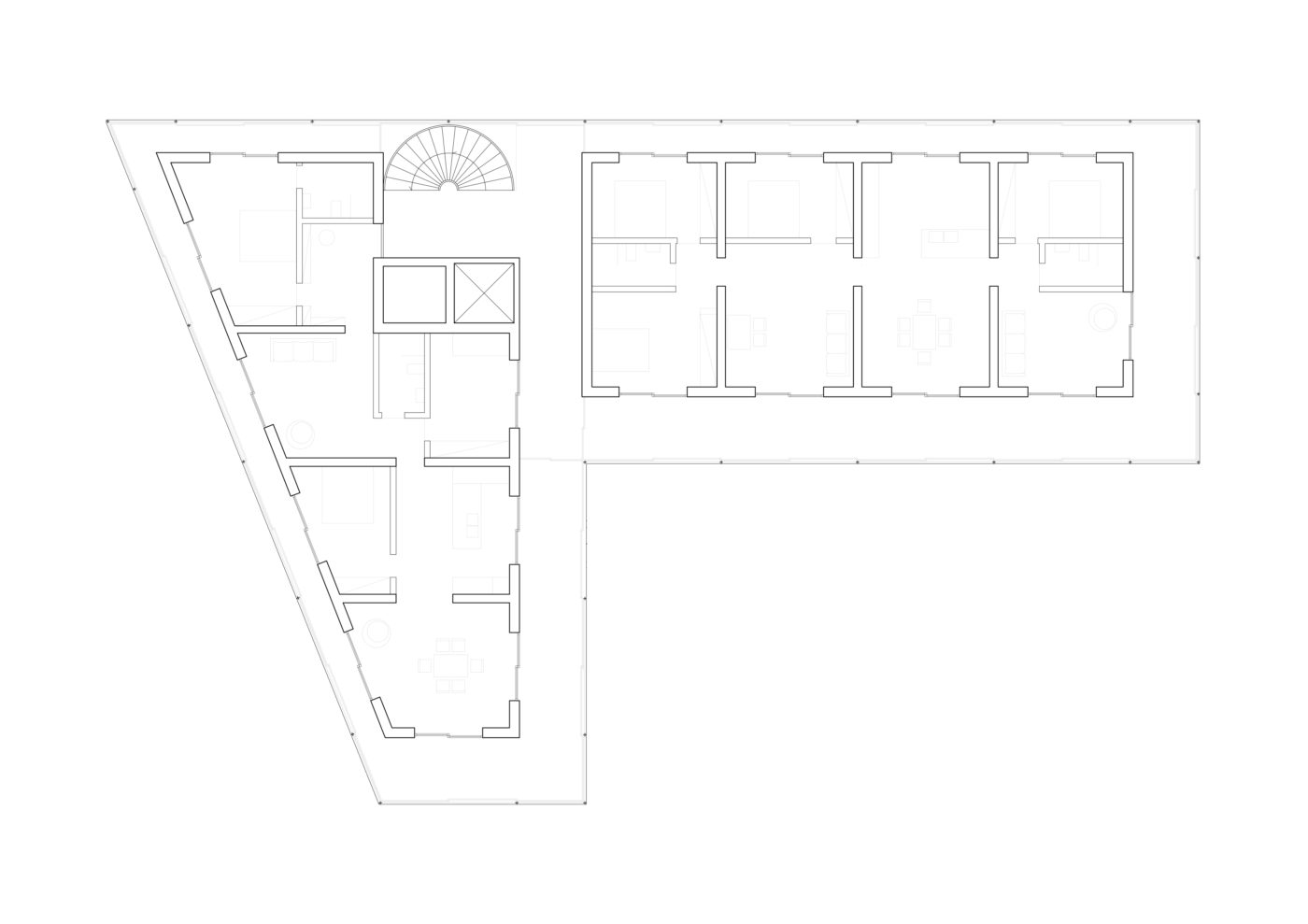 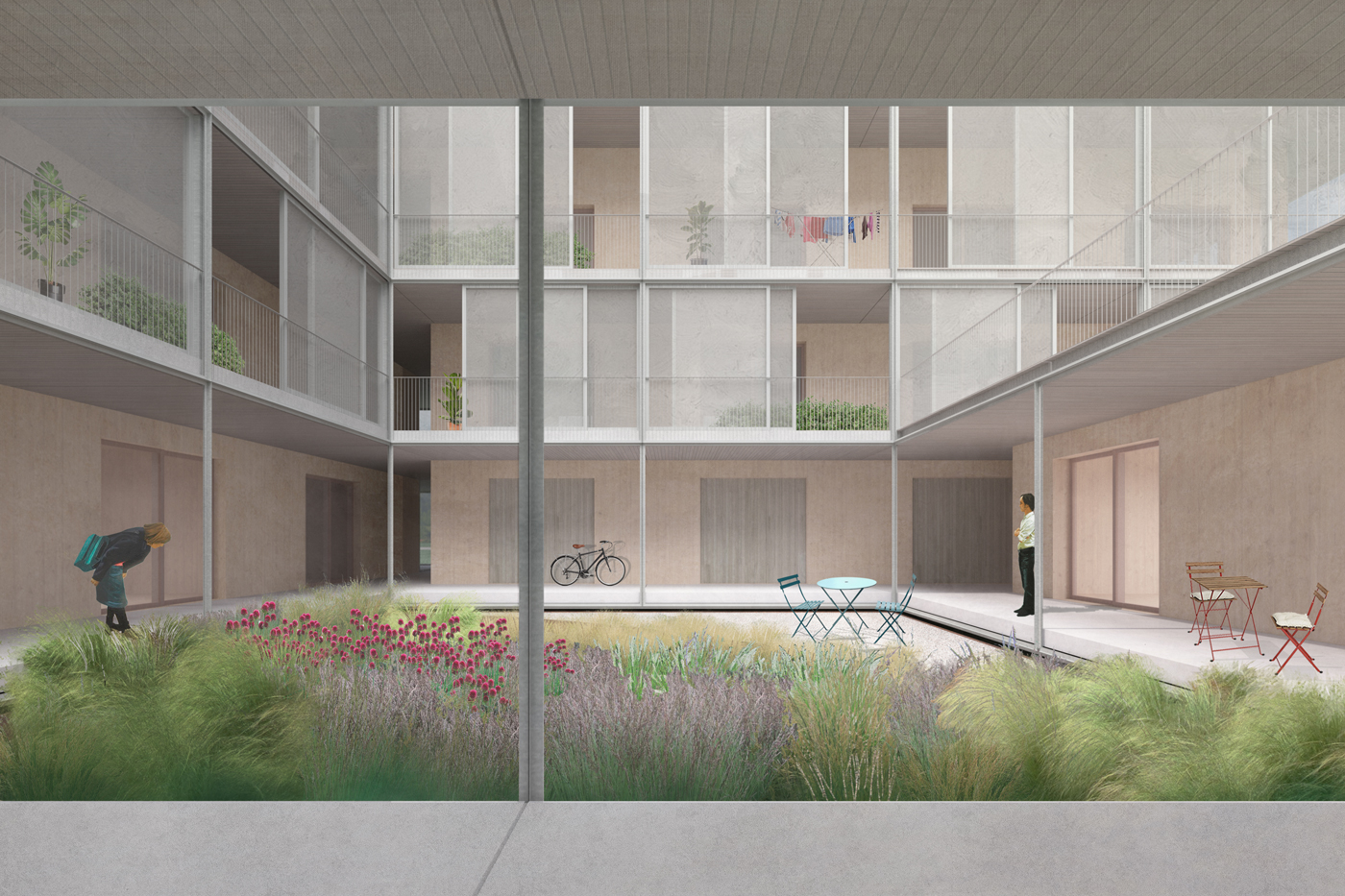 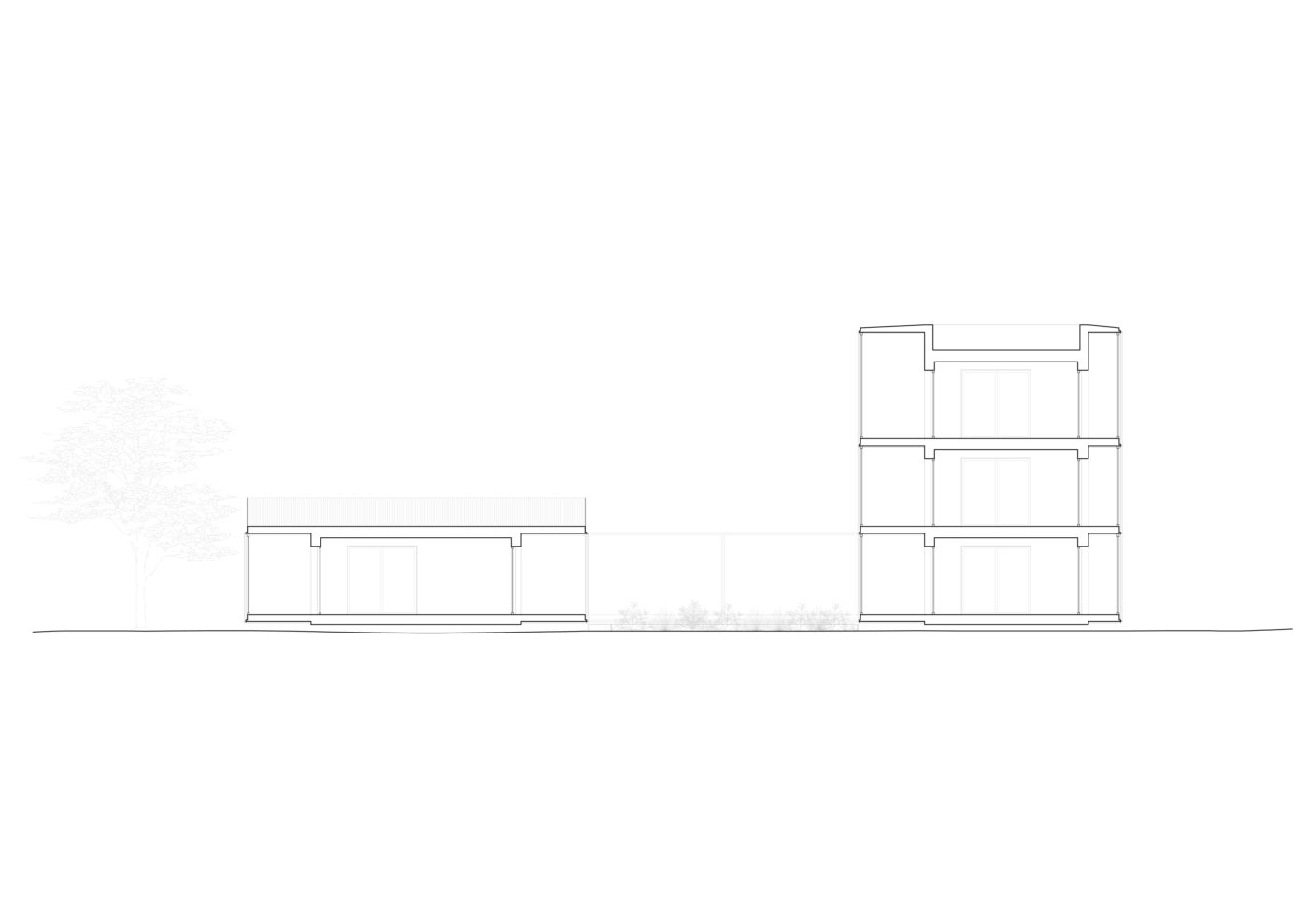 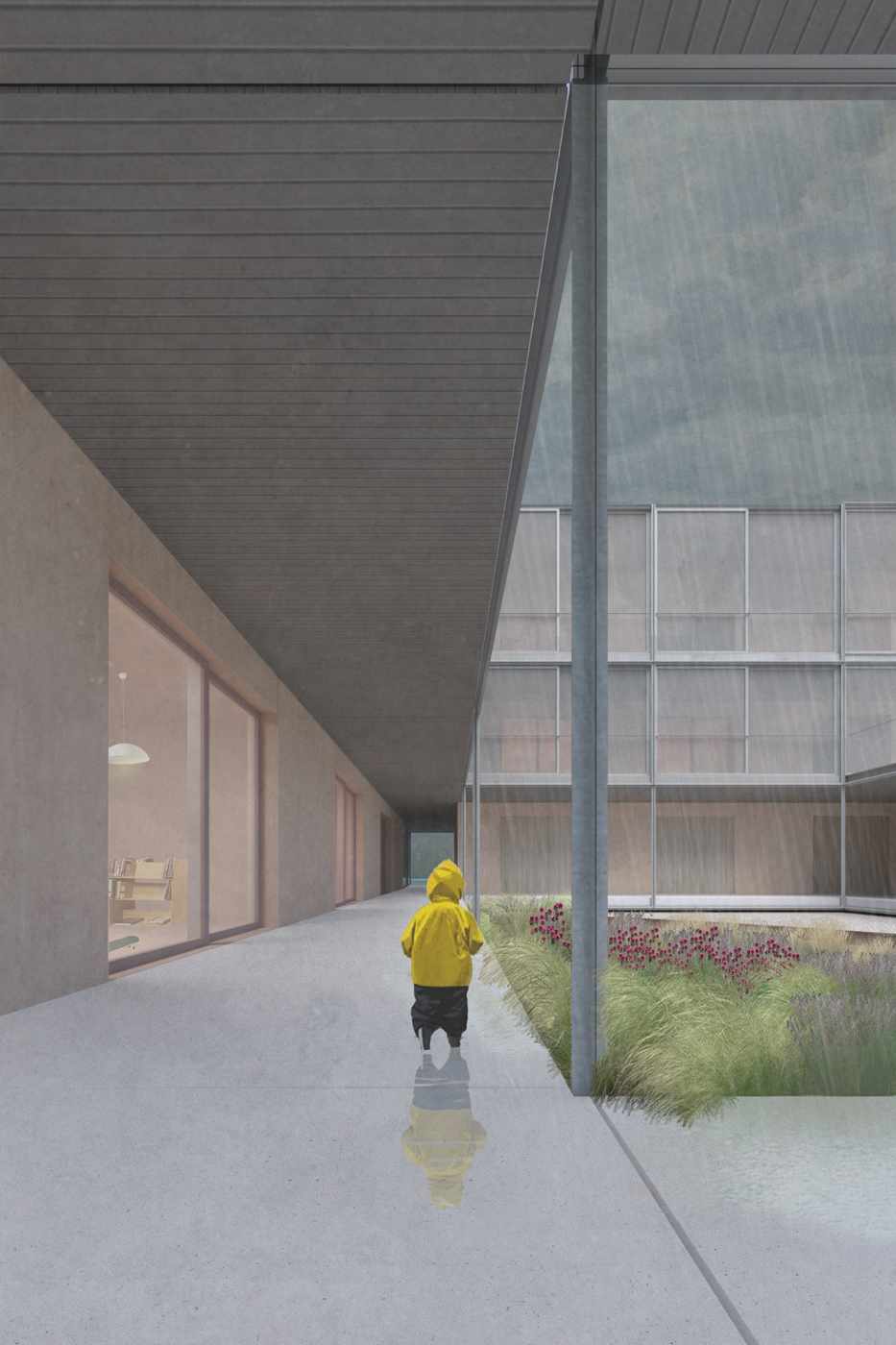 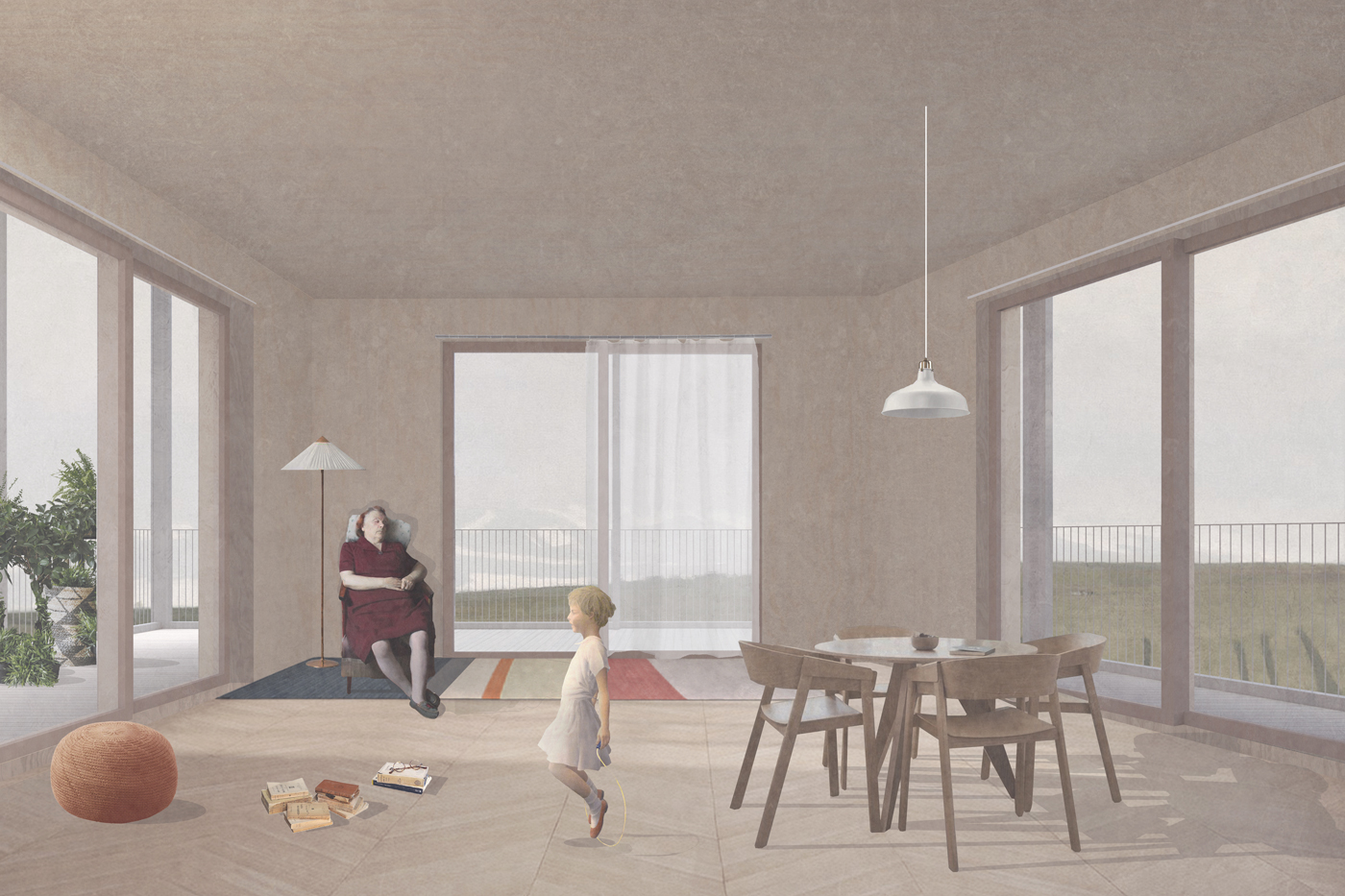 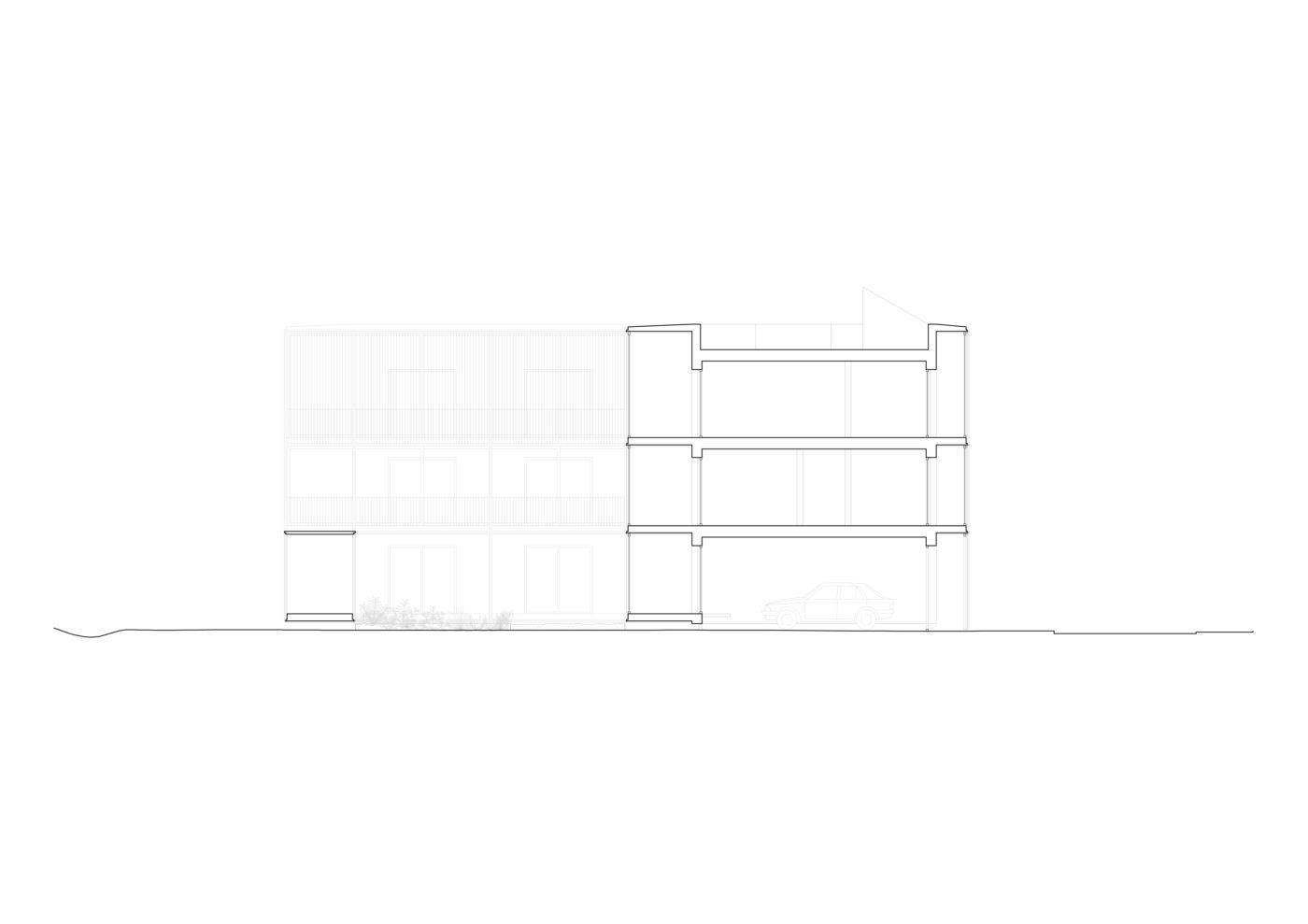 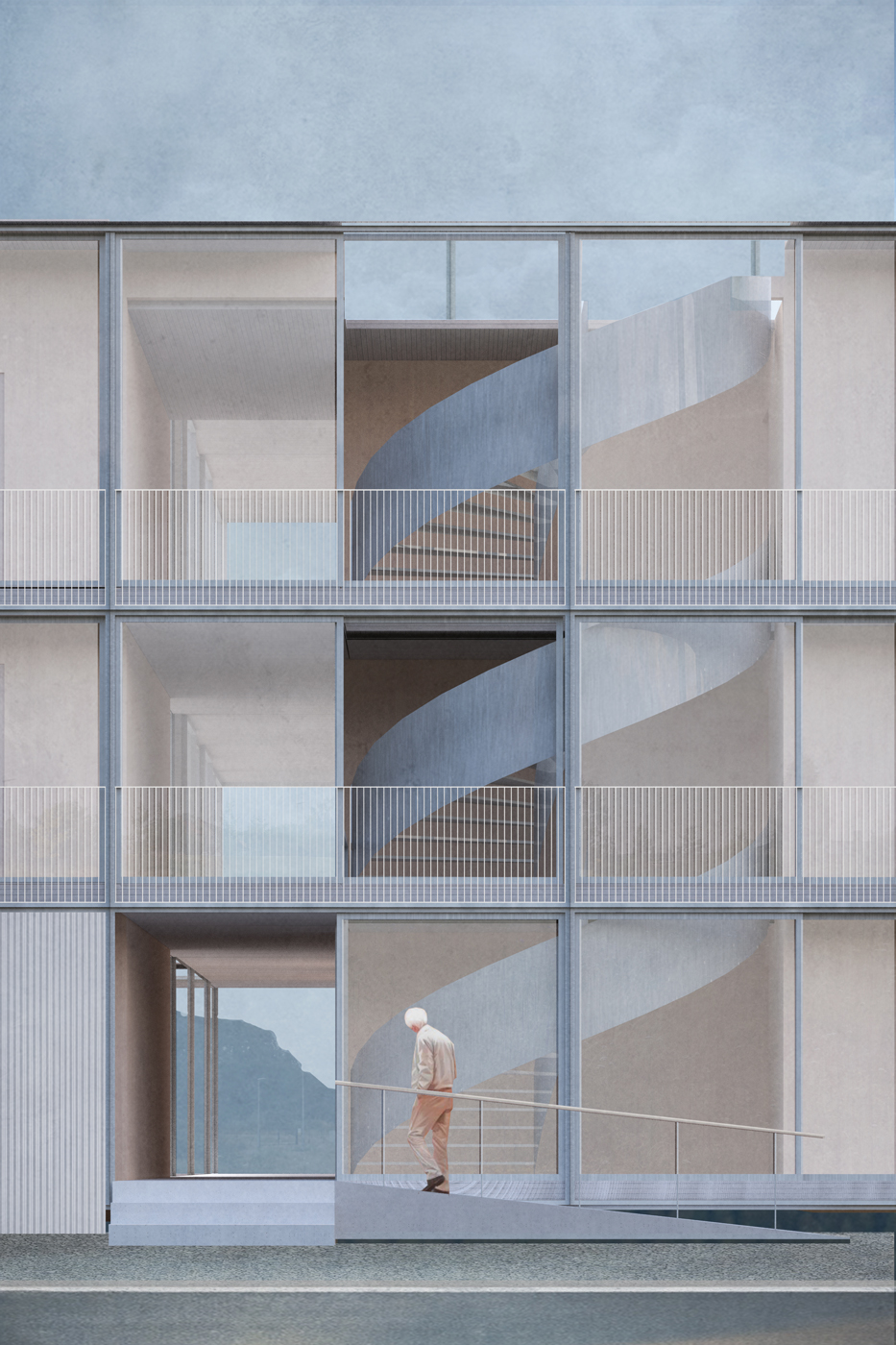 The project starts with a private client who decides to offer the “surface right” of his land, a sort of loan of an area for 99 years, for building affordable housing and activities related to the territory. The site is located north of Wernigerode, a picturesque town in the region of Saxony-Anhalt, in between the historical centre and the suburbs. 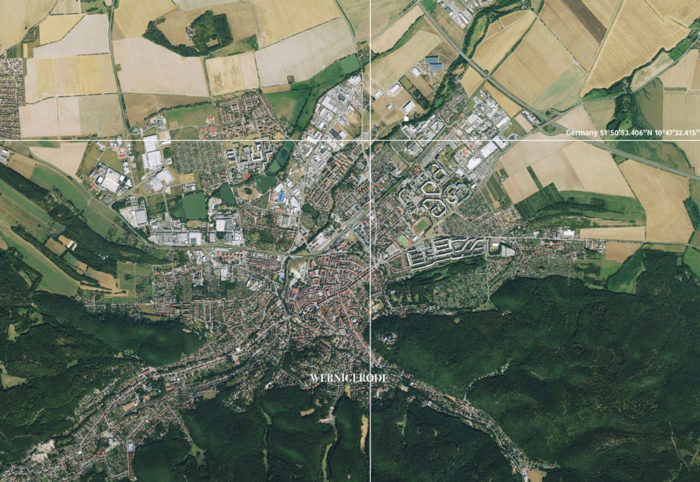 A positive side of the location has been fluid viability and a famous bike road which connects urban centres and passes alongside the river bank Holtemme.

However, during the studies, a high concentration of iron and zinc was found in the soil, which is not resulting dangerous to humans, but makes excavation, moving and disposal of the soil extremely expensive. 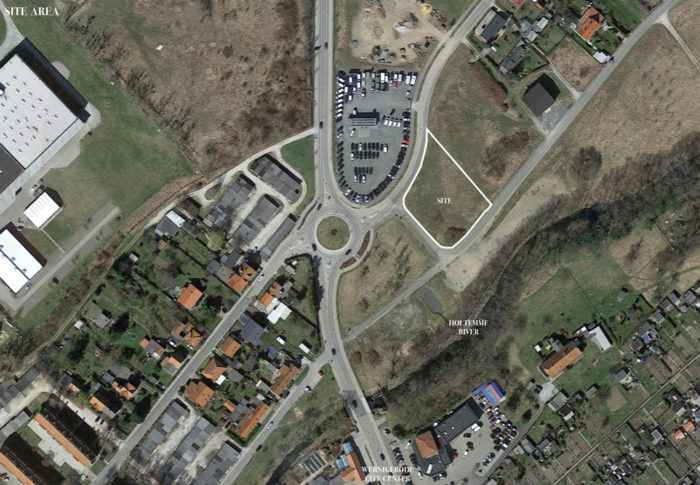 The project seeks both a sense of urban proximity typical of historic centres and the landscape quality of rurality. Therefore, it aims to use the minimum amount of elements to generate a various number of situations, in a gradient of spaces from public to private. 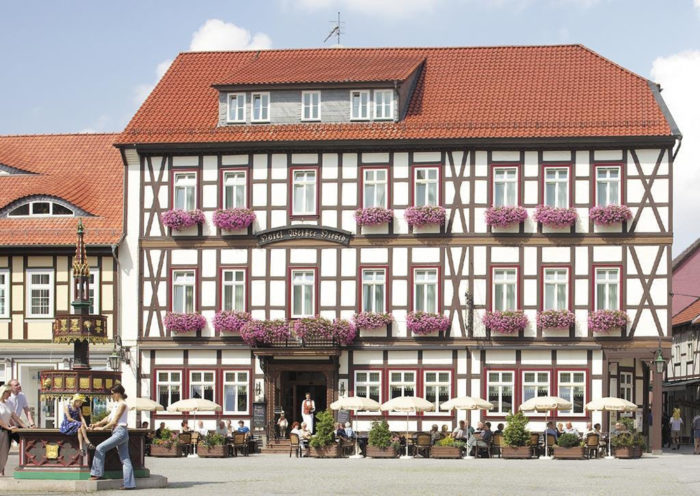 The external perimeter consists of an aluminium structure which is an open portico at some points and a winter garden at others. A sense of homogeneity defines the exceptional nature of the project in relation to the context of small houses and large factories. It refers to the local half-timbered structures, where brick walls are combined with wooden frames in the facades. 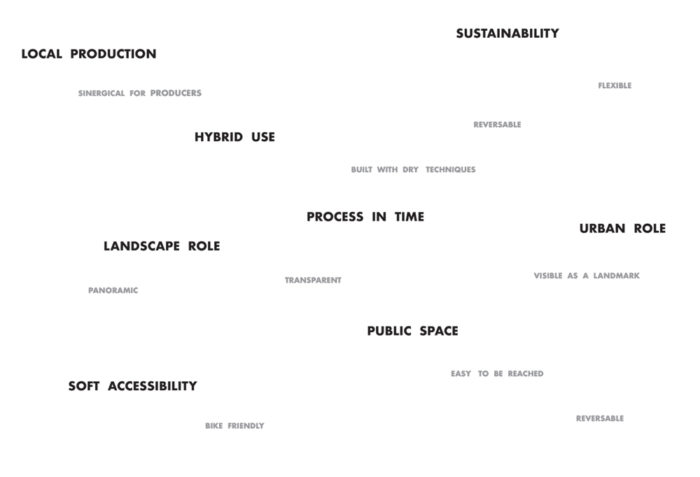 The first level of the project is raised above the ground to minimise the impact. the cafeteria, car parks and commercial activities consist of autonomous volumes held together by the system of paths, porticos and passages around the central courtyard. The intervention is suspended above the ground through a penumbra.

Since the relationship with the outside is not possible on the ground floor, the different levels provide outdoor spaces with various characteristics: winter gardens, porches, terraces, rooftop solariums, shared balconies 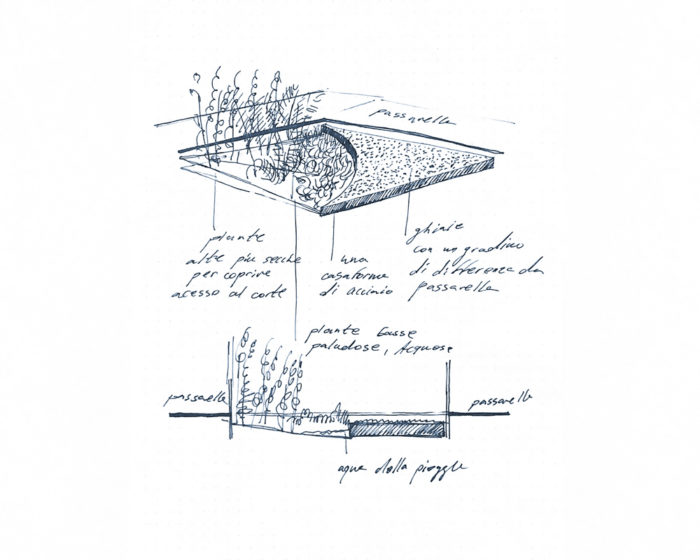 Sketch of the garden. By NOIA

The central garden is the core of the project, as it is the hub of the intricate system of proximity and at the same time could not be used conventionally due to the problems mentioned above. The flowers and essences are selected to be enjoyed from the porch level. 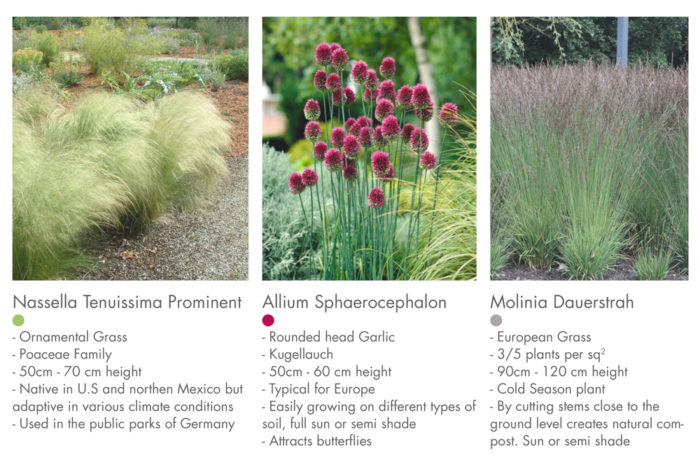 The selection is made based on compatibility with the soil composition and the ability to lower iron and zinc levels. As in any project, there is no progressive development of the design scale, but ideas must be present simultaneously at each scale, from the impression of the atmosphere of the intervention to the detailed solutions. 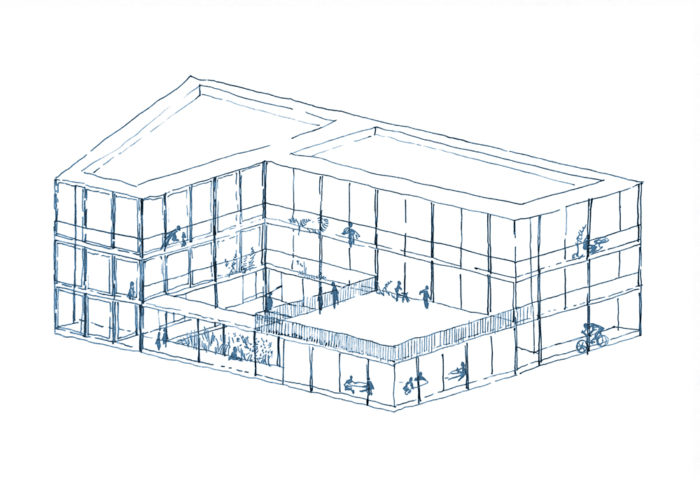 Sketch of the project, By NOIA

The sense of proximity is also present in the combination of the flats, so that there is a variety of users, from large families to short-stay guests. Access to the two rooms apartments is through a covered pathway/winter garden, which reinforces the idea of sharing in the intervention.

The approach to design issues is through the clarity of architectural solutions in each project area. Technical issues are also addressed through spatial responses, which reduce the use of resources and the need for climatisation through the flexibility of use and material physical characteristics.