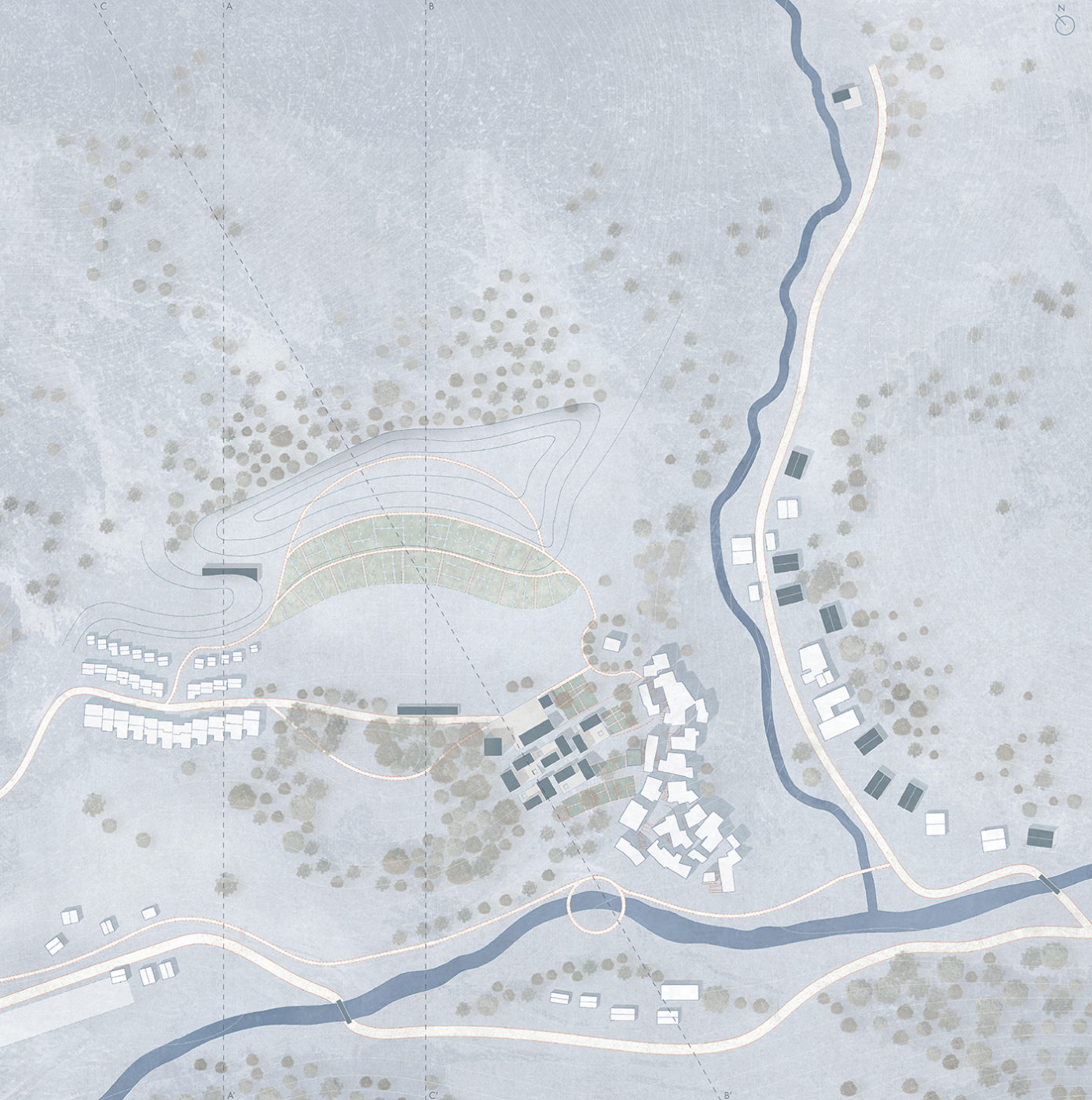 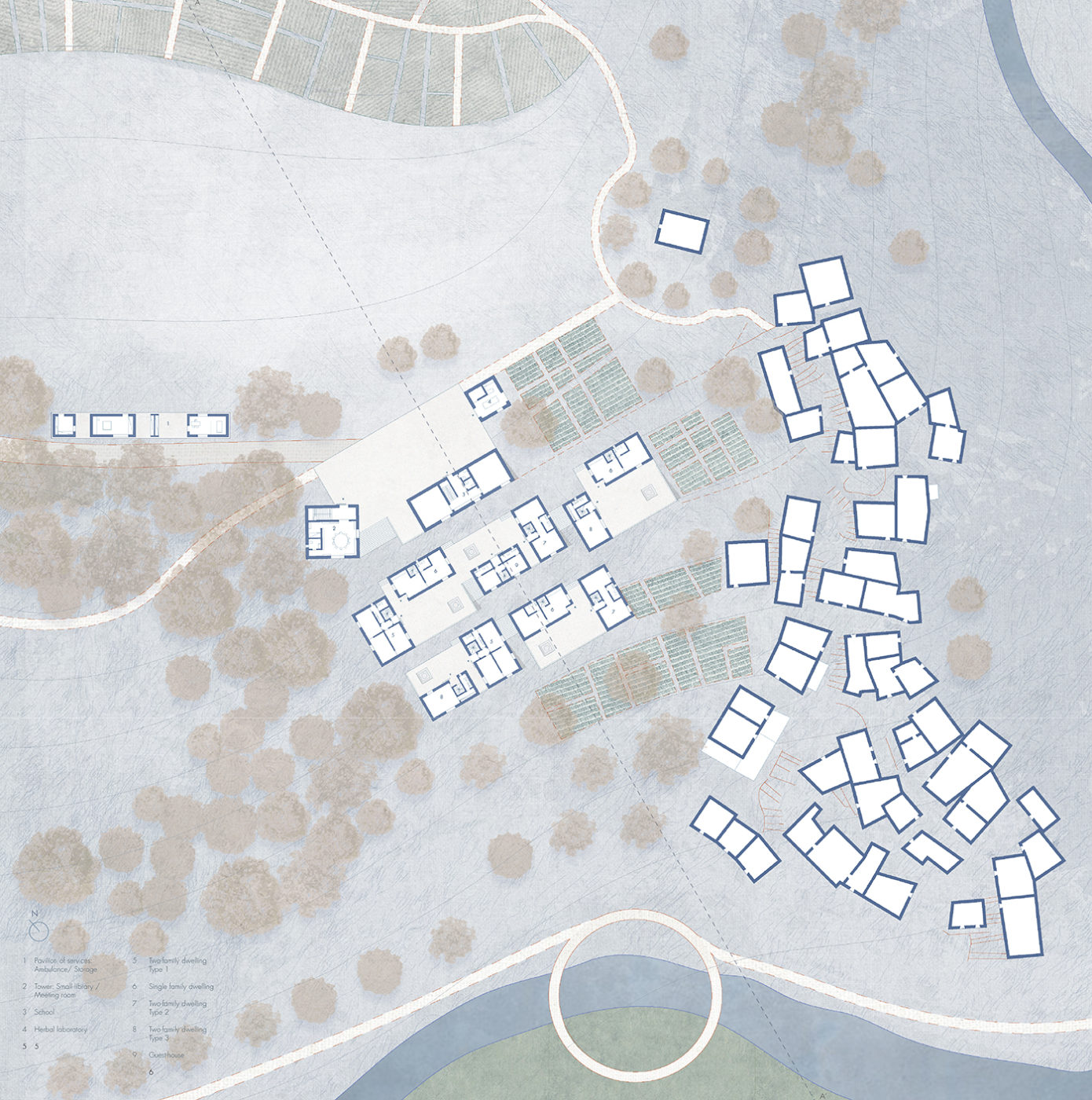 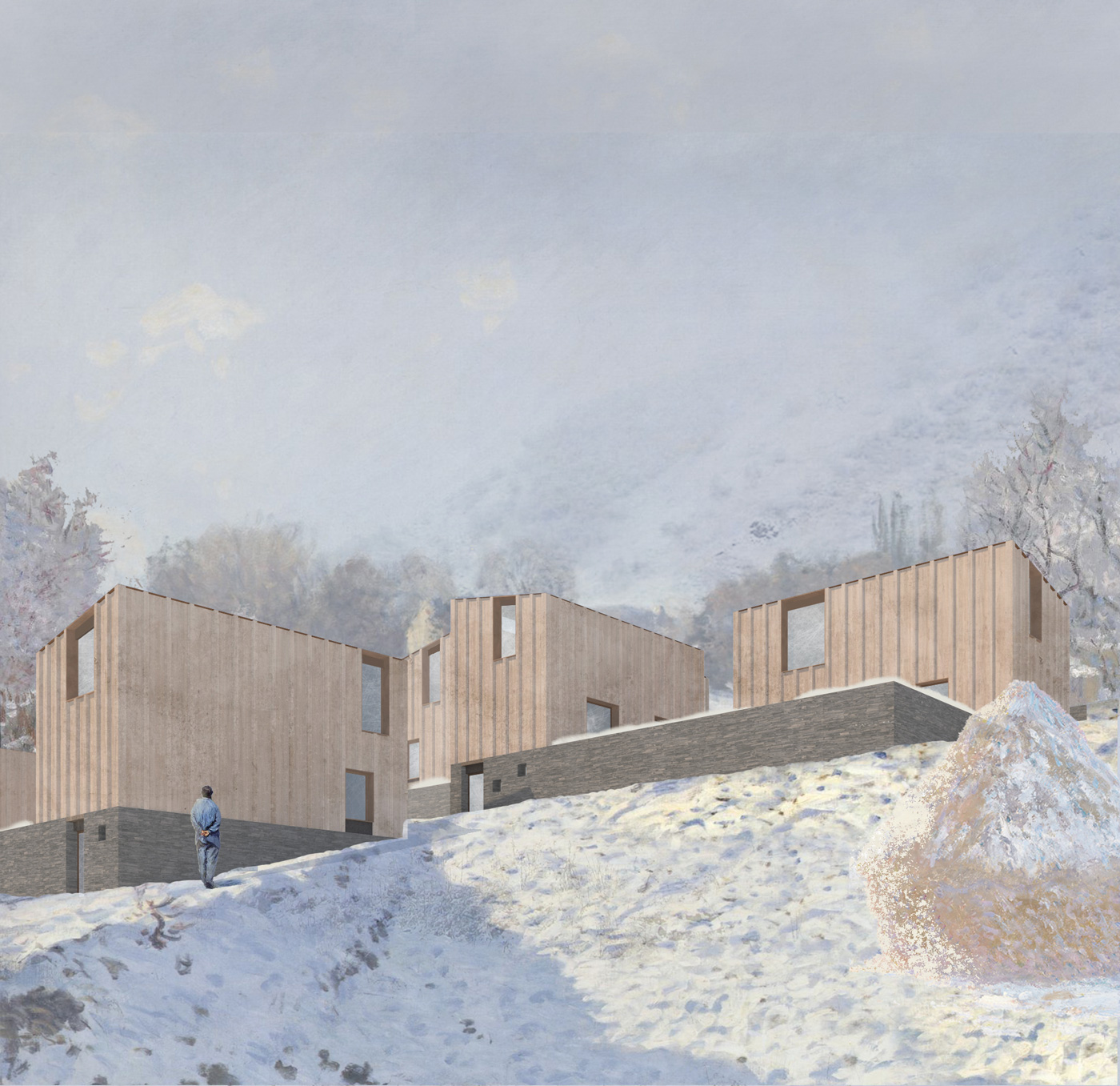 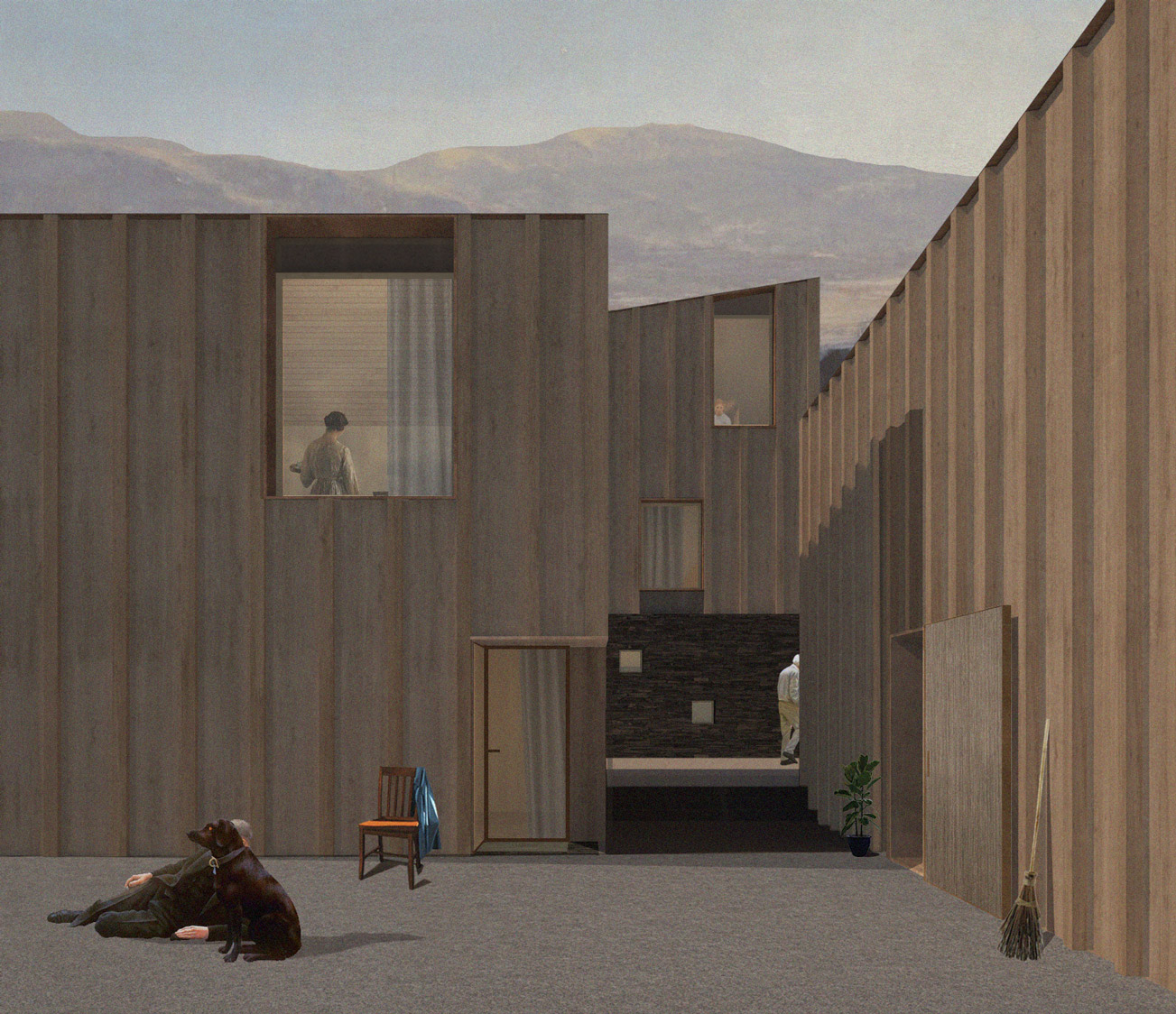 Khevsureti, Georgia
Inhabitation as an act of defining the border
MA research project, 2019

During the history of humanity, the concept of border resulted as a limit of the territory or geographical morphology rather than a dividing line between two different cultures and entities. Nevertheless, groups of people, united clans, or fortified settlements had always some sort of urge towards the idea of a line, a mono-dimensional element, functioning like delimitation of the controlled territory.

The project takes place in Pirikita Khevsureti (Georgia). In the present day, few families remain the whole year in the northern part of the region. Mainly, the population is spending 3-4 months of the summer and go to the lowlands for long winter, lasting for 7-8 months. Every November, because of the high snow, the road connecting Pirikita Khevsureti to the rest of the world closes. This situation makes the definition of the border between Georgia and Chechnya fragile.

The design strategy focuses on the seasonal division of the program through the territory. Shatili represents the best village to become a winter shelter because of its scale and distance from the current border.

Landscape intervention started by finding and expanding an emptiness inside the village. Rather than editing something, the approach was to take all unnecessary, mostly volumes under the risk of flooding or landslide, and give a free circulated space in-between complex elements of the village. The architectural scale strategy proposes a complete recovery of the castle and the possibility of densifying the recently self-constructed residences. However, the existing structures are insufficient to host the entire population of the northern region moving for Winter-Shelter. 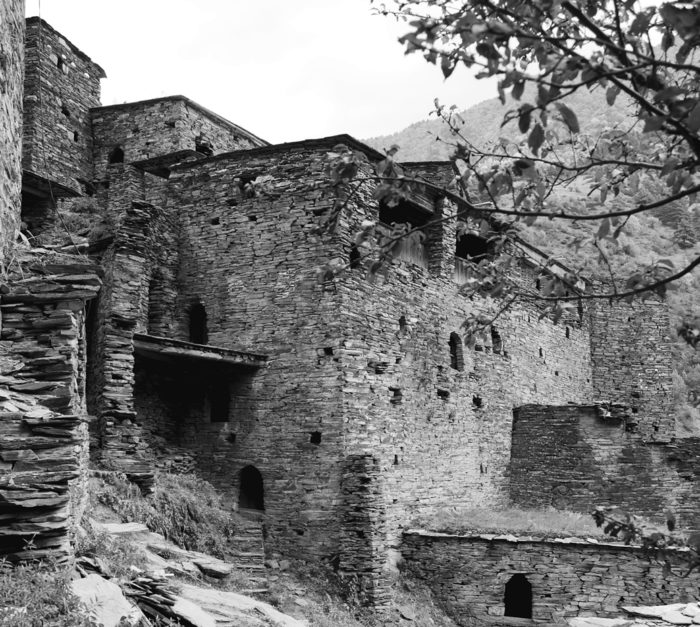 Additionally, the absence of adequate spaces for essential services must be mentioned, such as the school, library, ambulance, or even a meeting room for the community council.

The new community services are in the highest part of the slope, more easily accessible and close to the area dedicated to gardening and public activities. The residences are along with the slopes, by means of steps and terraces that connect all the different levels. Since it is a winter shelter, different degrees of living in common had need to be possible.

For this reason, a sense of proximity between the inhabitants is possible because of the arrangements of volumes. Small squares and terraces, which become places of sharing and connection, permits the accesses to the units. The proposal shows a possible combination of the local residential typologies and traditional lifestyles of the region with current needs.

The intervention proposes a mixture of single-family, multi-family types, and guest houses. The floors above ground are designed primarily as minimum dwellings; the lower levels are the room in common to be shared.

Besides, the intervention addresses the theme of temporariness through specific solutions. In particular, the combination of two different construction systems, specifically appropriate to the context: a cavity wall system with the use of local stone for the lower floor, and a wooden frame platform system for the upper floors.

The cavity walls are considered permanent elements of the intervention, which are easily adaptable in the future. The wooden volumes, which could be disassembled and reassembled elsewhere if necessary, are the temporary elements.

Moreover, these particular construction choices are very convenient, since it is not possible to transport the construction materials easily. The public buildings are exceptions in the common rule: the tower and the small workshop are entirely in stone, the school maintains a stone base half a meter above the level of the access square to highlight the civic importance. 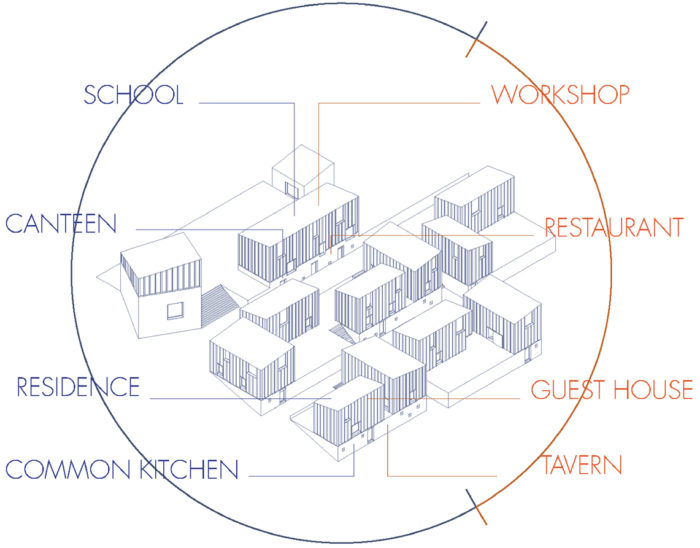 Alongside the seasonal division, the principle of social and environmental sustainability is expressed through the accommodation of different activities over time, in spaces that could be modified, disassembled, and moved elsewhere.

As a result, the thesis is not an attempt to prevent urban polarization, centralization of cities, or their continuous urge of expansion, but to consolidate territories exposed to major geopolitical threats.